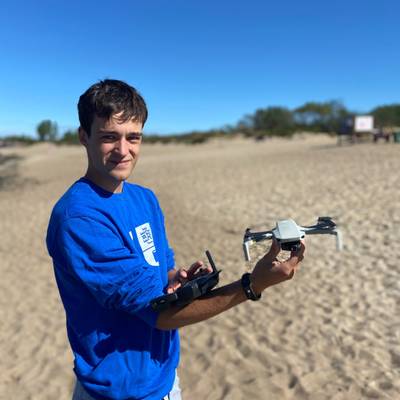 The winter images of the Baltic seashore might seem blindingly white, but the layer of snow covers the dark side of this beautiful sight – the environmentally damaging litter left behind or washed away by the waves. The quantities of litter found on Lithuanian beaches exceeds the European standart which defines the good condition of beaches by a dozen to several dozen times over. The situation is no better in Latvia either.


Scientists from neighboring countries have joined forces for the first time in confronting the plastic pollution problem. They are not just talking widely about the results of research carried out on the coast for the past two years, but have also prepared specific guidelines for municipalities, the catering and tourism businesses, and other sectors that would help to achieve positive changes.

Both Lithuanian and Latvian researchers have drawn attention to the problem of plastic pollution and have been carrying out studies and calculations for around a decade, highlighting the fact that single-use plastic products and their fragments dominate among the litter found on coastal stretches, while microplastics have long been dominant in the category of micro trash. “Still, there was no general monitoring system that would provide opportunities to have more clarity, compare data and look for the most appropriate solutions to the problem” noted Dr. Arunas Balčiūnas of the Maritime Research Institute of Klaipėda University (KU).

When scientists noticed that algae attract garbage and its fragments like a trap, monitoring their accumulation and emissions on the shore became an extremely significant activity of the project. In the implementation of the project innovative methods were used – beach surveys with drones as well as the analysis of data collected by satellite systems. While processing them, the researchers also integrated artificial intelligence technologies to help model and map algae emissions. “We took, I would say, pioneering steps, because in Europe we did not encounter stronger attempts to work on a project on plastic litter topic by combining all these tools,” a KU JTI researcher highlighted.

Consecutive observations were carried out for two years, during which time it was possible to identify the coastal stretches where algal wracks occur most frequently. In Lithuania, the areas in Klaipėda at the northern pier, as well as the northern beach of Šventoji, are exceptional in this regard. In Latvia, algal wracks were primarily recorded between Pape and Jūrmalciems, as well as in the north of the Venspils pier and in the section between Jūrmala and Bigaunciems.

According to dr. Balčiūnas, it is potentially the first time that the composition of the abovementioned accumulations has been studied so carefully: “Research into garbage entangled in algae has been a kind of gray zone until now, because it is quite difficult to carry them out.”

The research revealed that there was significantly more litter in the algae than in the nearby receding beach sand – the numbers ranged from 2.7 to 6.4 times in the stretches studied. In this context, microplastics are a real ecological timebomb. These particles, which are smaller than 5 mm, are found in extremely large quantities in seaweed: 1 m³ of algae can contain from several tens of thousands to several hundreds of thousands of microplastic fragments. Being highly resistant and created from various chemical compounds, they pose a significant threat to living organisms.

According to the scientists, society is already quite aware of the essential sources of plastic: disposable cutlery, packaging and decorations, certain cosmetics ‘rich’ in microplastics, and synthetic textiles. “However, sometimes we don’t even think about other forms of how plastic moves in cities and ecosystems. For example, the mountains of snow cleared from the streets absorb transport pollution, garbage, and microplastics, which melt and flow into the seas and oceans,” the scientist pointed out.

Bearing in mind the data obtained during the research carried out in Lithuania and Latvia, it is concluded that collecting algae could eliminate quite significant amounts of plastic and other garbage from the marine environment. However, there is no one answer – algae provide both food and shelter for certain species.

Once the decision to remove the algae from the shore has been made, certain dilemmas arise again. In some countries, it is a common practice to use these marine plants as mulch or dune reinforcement, but knowledge of the plastic and microplastics in such accumulations would potentially discourage this.

However, scientists tend to suggest removing algae that stay longer on beaches in the warm season to special sites or for burning. According to researchers, unmanaged algae can serve as a kind of incubator in which microorganisms dangerous to human health grow. It has been determined that three days is the limit for when algae should be removed from beaches visited by vacationers, otherwise disease outbreaks are possible. The processes are especially intensified in warm weather, but even in autumn when, following stronger winds, people rush to look for amber in the algae wrack, the danger also remains. Therefore, it is necessary to pay attention to hand hygiene, and to keep a closer eye on children when exploring the environment.

Balance of discipline and encouragement

While stressing the need to respond appropriately to algalemissions, researchers emphasize the importance of preventative actions to ensure that the sea and beaches stay clean. In December, scientists from Lithuania and Latvia presented an action plan prepared within the framework of the “ESMIC” project, which aims to reduce the use of single-use plastic products in the household, business or during recreational activities.

In preparing this package of tools, which will remain permanently available online, the researchers sought to draw attention to the fact that the involvement of different groups of society is necessary in order to achieve tangible change. “Beach clean-up events are great, but we need to be consistent. You see garbage – pick it up, think about it when buying and selling a souvenir, a product, wrapped in one way or another. The action plan identifies very specific areas and situations where we can and must be proactive in integrating alternatives to single-use plastics,” claimed Balčiūnas.

Coastal municipalities are able to create stricter frameworks for the use of single-use plastic through the mechanisms of issuing permits and licenses for catering, trade sectors, organizers of major events. The implementation and promotion of the deposit system in bars, festivals, more drinking water fountains or taps – this would also significantly contribute to reducing the level of single-use plastics.

However, restrictions are not the only way of achieving this – it is also important to highlight those who bring about positive changes on their own initiative. Consequently, the “ESMIC” project initiated the “Conscious Choice” awards for organizations and individuals who contribute to the reduction of single-use plastic and educate the public through their activities and example. At the end of this year, the Latvians “Tiamo Grupa”, VšĮ Žemupite, a cafe-bar „Kuršis“ operating in Nida were honored, along with Bronislava Butkutė, a resident of Šventoji town.

The “ESMIC” team highlights that municipalities, business and society do not ignore the problem of plastic – this was evidenced by the involvement of organizations in various events during which relevant information and good practices are shared, as well as cross-sectoral cooperation in the implementation of educational initiatives and exhibitions.

The “My Sea Campaign”, which was organized for the first time in Lithuania this autumn, invited people together with scientists to not only to collect and count garbage on the beaches of Karkle, Melnragė, Šventoji and Palanga, but also discuss environmental challenges and possible ways to solve them.

The fact that “ESMIC” responded to a truly relevant problem was not only evidenced by the attention of the national media, but also by the assessment of the project’s importance on an international scale – “Euronews TV” came to film the “My Sea Campaign” and was interested in the work of the researchers. The “Smart Regions” TV show created opportunities for Lithuanian and Latvian scientists to share their insights with an audience of 155 countries in seven languages.

If nothing else matches:
choose
Why do we ask this?

We tried to guess your citizenship based on your current location. In case we are wrong, please correct it, so that you will see deadlines and requirements that apply specifically to you.