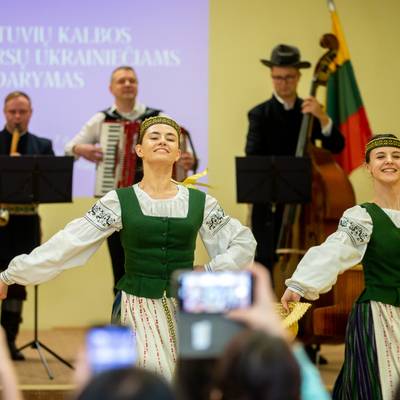 The autumn courses of the Lithuanian language and culture for Ukrainians at Klaipeda University (KU) ended with a lively closing ceremony.


The closing event was a real surprise for the course participants, who were entertained by the dancers of the KU Song and Dance Ensemble Vytinė. The organisers of the courses were also excited to hear Ukrainians expressing their gratitude in Lithuanian upon receiving their graduation certificates: some of them prepared short thank-you speeches, and even rhymed impressions were recited in Lithuanian. The autumn courses, which lasted for 2 months, were attended by 77 people. They studied in five groups of different levels, for three academic hours three times a week in the evenings.

The end of the autumn courses marked the end of the complex Lithuanian language education programme for Ukrainian citizens who had fled to Lithuania because of the war, which started at KU in March. The first courses were organised shortly after the beginning of the hostilities in Ukraine: they started in March, were short and focused, and were taught by KU teachers and student volunteers. The summer courses, which took place in July-August, were attended by Ukrainians together with other participants of the Lithuanian Language and Culture Summer Academy. All courses were contact-based, except for the summer courses, which provided an opportunity of online learning.

A total of 272 people were enrolled in the 2022 Lithuanian language courses for Ukrainian citizens. Not all participants were able to attend the full course due to work, family, or other changes in circumstances. A large number of participants started the studies in the spring and managed to master the language from Level A1 to B2. Of course, some of them wished to continue their studies. The next opportunity is the Winter Academy of Lithuanian Language and Culture to start in January.

The intensive language training has been well complemented by a programme of cultural events –trips and excursions. During them, the participants of the courses visited famous places in Lithuania and got acquainted with Lithuanian history and traditions. The courses were funded by the Education Exchanges Support Foundation and Klaipėda City Municipality.

To make all this happen, the team of course organisers – the Centre for Lithuanian and Foreign Languages of the Faculty of Social Sciences and Humanities of KU, together with the staff of the Department of Philology and some other KU staff members – have been involved in new teaching projects. The teaching of Ukrainians took place against the background of other numerous activities of non-formal teaching of Lithuanian at KU in 2022.

Breakthrough in teaching Lithuanian at KU

It should be noted that the teaching of Lithuanian to foreign citizens at KU has entered its third decade and has long been recognised and highly valued at the national and international level. In October, KU teachers of Lithuanian lecturer Jūratė Derukaitė and dr. Kristina Blockytė-Naujokė gave a presentation at the high-quality international scientific conference Lithuanian Studies in Sakartvelo in Tbilisi. The main initiator of the conference was prof. Vidas Kavaliauskas, head of the Centre for Lithuanian Language and Culture in Sakartvelo. A number of Lithuanian teachers were invited to the conference, as well as representatives of the Republic of Lithuania Ministry of Education, Science, and Sports, diplomats, and Mrs. Diana Nausėdienė, who is in charge of the activities of Lithuanian schools abroad. During the conference, a presentation on successful teaching of the Lithuanian language at Klaipeda University was also given by students from Sakartvelo, participants of the KU courses.

The year is coming to an end for the organisers of teaching the Lithuanian language at KU with intense preparations for the upcoming winter courses as well as the preparation of applications for new activities. We are grateful to the KU administration who always support this area of activity important for the University.

If nothing else matches:
choose
Why do we ask this?

We tried to guess your citizenship based on your current location. In case we are wrong, please correct it, so that you will see deadlines and requirements that apply specifically to you.